Home / 8 Wonders of Kansas / customs / Checking on the weather, Harper
An 8 Wonder of Kansas Customs

Checking on the weather, Harper

Great example of a weather aid:  The Red Fish atop the Harper water tower! 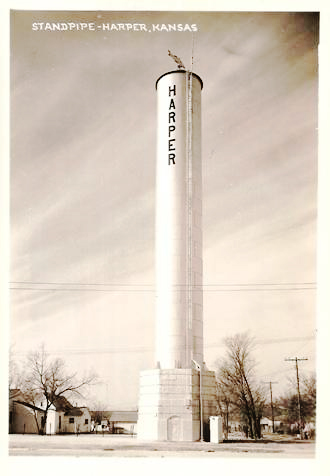 HISTORY
It's not hard to spot the red fish on top of this unique stand-pipe water tower.  After the 125-foot tower was erected in August 1887, a nine-and-half-foot red fish was put at the top as a weather vane.

An August 13, 1887 quote in "The Daily Sentinel" said, "The first fish for the stand-pipe arrived yesterday and is in fine condition.  He is built of cast iron and will be located on top of the pipe to act as a weather vane.  In fishing for him a shot gun will be better than a trout rod."

A quote in the September 19, 1887 "The Daily Sentinel" said, "The big metal fish or weather vane has been hoisted to its place upon the top of the stand-pipe and although about 12 feet long, looks like a minnow in the bottom of an Anthony beer hogshead."  Note:  Anthony was the neighboring town and county seat.

In 1892 when a tornado hit Harper, the fish was bent double, and the pole that held it was damaged.  The fish was brought down, bent back, and returned to its place.

Here is "Pop's" account of the 1892 tornado.  "The cyclone blew the fish off of the pipe and it rested on the edge of the standpipe.  I got Bruce Broadstone and we took the fish down and its head and tail were together. The fish is 9 feet long and the pipe is 16 foot."

The fish has remained a town symbol ever since.