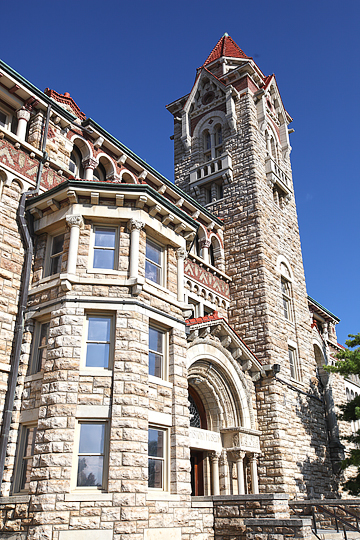 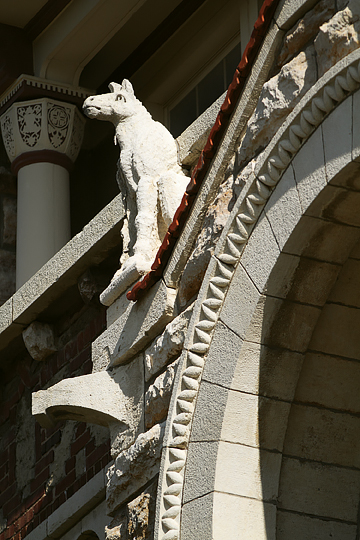 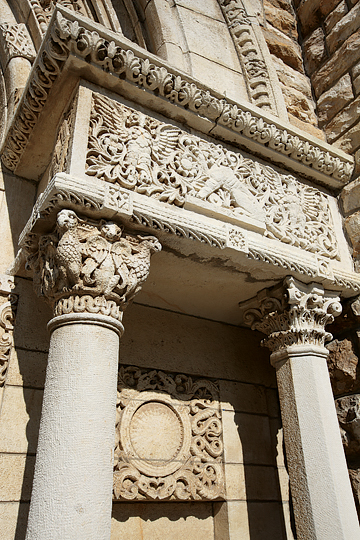 Dyche Hall is a finalist for the 8 Wonders of Kansas Architecture because carvings of birds, beasts, and reptiles adorn this building that houses the Kansas University Natural History Museum.
The architects of Siemen & Roots said in a 1902 Lawrence Daily Journal World article that they intended to "carve beautifully all manner of birds, beasts and reptiles....We wish to build a building which will be unique in itself, yet not inharmonious with the other buildings, and which will be a beautiful crown to this unusual site, and a source of pride to the citizens of the state always."

Dyche Hall is adorned with 6 aedicules, each with the last name of naturalists and overseen by grotesques. Names of the naturalists are [Charles] Darwin, [Thomas Henry] Huxley, [John James] Audubon, [Asa] Gray, [Edward Drinker] Cope, and [Louis] Agassiz.

This Romanesque building completed in 1903 was renamed for Lewis Lindsay Dyche after his death in 1915. A flamboyant naturalist, explorer, taxidermist and lecturer, Dyche collected many of the specimens that formed the start of the museum's natural history collections. His expert skill in taxidermy was one of the major highlights of the 1893 world's fair, and many of those same specimens are on display in the Panorama of North America on the fourth floor of Dyche Hall. Dyche is also famous for the preparation of the horse Comanche, cavalry survivor of the Battle of Little Bighorn.

In 1932, the board of regents closed the building and deemed it unsafe for occupancy. It was saved from demolition and reopened to decades more visitors.

But anyone visiting Dyche Hall will be impressed by the limestone architecture that surrounds all that activity. There are creatures, some fantastical, some representative, to discover tucked into corners and poking out the stone facade.