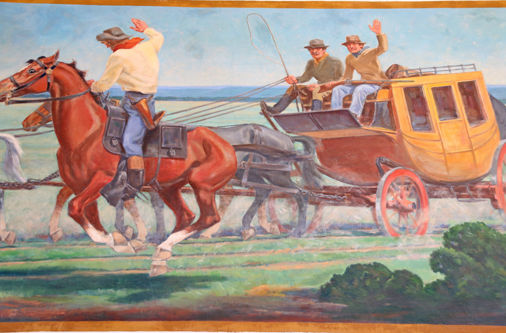 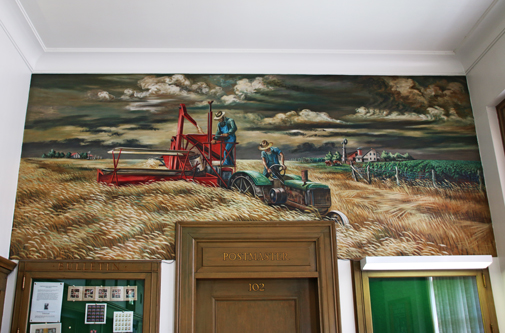 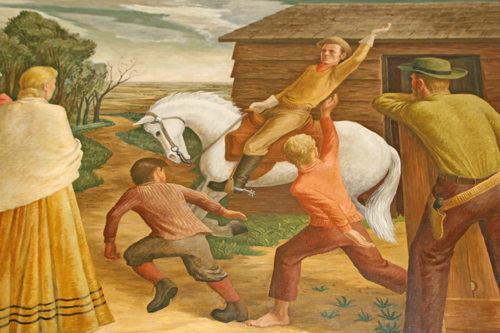 From left to right: Section Art in Sabetha, Seneca and Horton

Post Office Section Art is an 8 Wonders of Kansas Art finalist because of its purpose. Artists were paid before and after the depression by the federal government to decorate public buildings, like post offices.

Throughout the United States - on post office walls large and small - are scenes reflecting America's history and way of life. Post offices built in the 1930s during Roosevelt's New Deal were decorated with enduring images of the "American scene."

In the 1930s, as America continued to struggle with the effects of the Depression, the federal government searched for solutions to provide work for all Americans, including artists. During this time government-created agencies supported the arts in unprecedented ways.

Often mistaken for WPA art, post office murals were actually executed by artists working for the Section of Fine Arts. Commonly known as "the Section," it was established in 1934 and administered by the Procurement Division of the Treasury Department. Headed by Edward Bruce, a former lawyer, businessman, and artist, the Section's main function was to select art of high quality to decorate public buildings - if the funding was available. By providing decoration in public buildings, the art was made accessible to all people. Post offices were located in virtually every community and available for viewing by all postal patrons - which made post office murals a truly democratic art form. Artists working for the Section were not chosen on the basis of need, but through anonymous competitions where the national jurors were often other artists.

Source: From "Articles from EnRoute: Off the Wall: New Deal Post Office Murals" by Patricia Raynor

Many post office murals have vanished over the years. Others are in need of repair. In Kansas twenty-nine murals and sculptures were commissioned. Twenty-one still remain in active post offices. The subject of each painting is almost always based on the local history or economy of the community. The vibrant colors and stirring action in each tell a unique story.

The following are Kansas post offices that still have their Section Art:

Fredonia: Delivery of Mail to the Farm by Lenore Thomas, 1939, glazed terra cotta

Horton: Picnic in Kansas and Changing Horses for the Pony Express by Kenneth Evett, 1939, oil on canvas

Kingman: In the Days of the Cattlemen's Picnic by Jessie S. Wilbur, 1942, tempera

Sabetha: The Hare and the Tortoise by Albert T. Reid, 1937, oil on canvas

Columbus: R.F.D. by Waylande Gregory, 1940, sand sculpture. The sculpture has been moved from the post office and is now inside the community building at 320 E. Maple.

Fort Scott: Border Gateways by Oscar E. Berninghaus, 1937, oil on canvas. The post office still has the mural but it's not publicly accessible. They will show it to anyone that asks.

Olathe: The Mail Must Go Through by Albert T. Reid, 1940, oil on canvas. The mural hangs in a public area in the Olathe Public Library at 201 E. Park.

Salina: Land and Communication by Carl C. Mose, 1940, sculptures. Now located on the outside of the Smoky Hill Museum, 211 W. Iron, the former post office building.

Source for cities, name of art, artist, year, and type of medium: http://www.wpamurals.com/kansas.htm

Another excellent site that shows pictures of each is:http://freepages.genealogy.rootsweb.ancestry.com/~mogeneal/wpa/kspo.htm 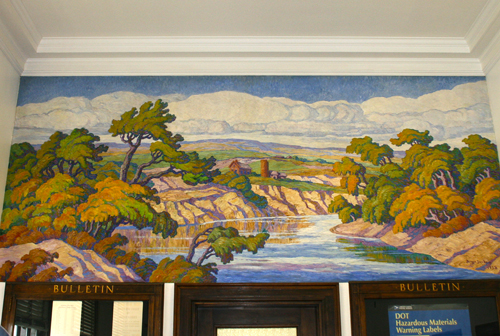 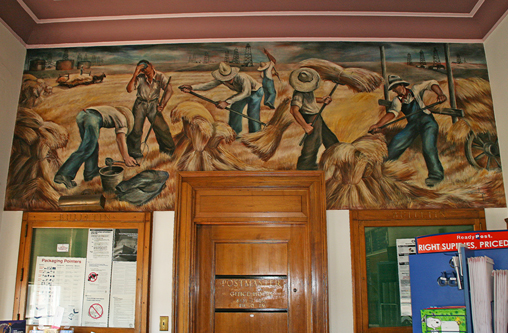 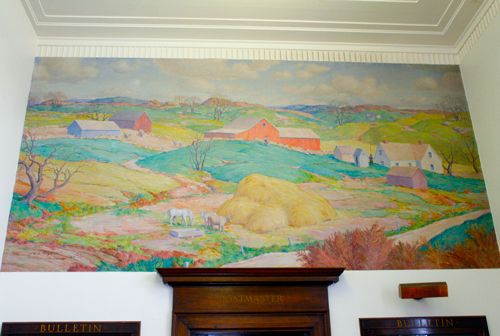 From left to right: Lindsborg, Russell and Council Grove.