Home / 8 Wonders of Kansas / customs / Racing on a dirt track, Belleville
An 8 Wonder of Kansas Customs

Racing on a dirt track, Belleville

Custom: Racing on a dirt track.

Where can you see this custom take place? At Belleville's High Banks, the world's fastest Half-Mile Dirt Track and the oldest continuously used dirt track in the U.S. The track is at 7th and O. 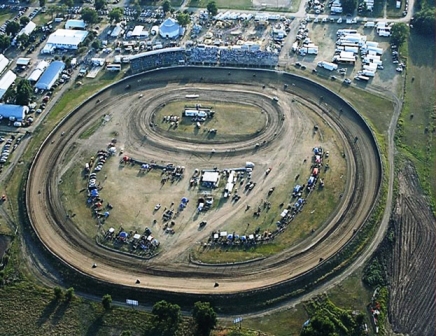 THE HISTORY OF THE TRACK
High Banks is a historic dirt track built in the 1910 era for racing events that encompassed everything from horses to motorcycles. In the 1930s a limestone grandstand with a banked oval was built at the fairgrounds as a Works Progress Administration (WPA) project.

With the exception of the war years, 1942-1945, the track has operated continuously. Belleville's track is the fastest half-mile track in the world. It has a 23-degree bank and is 80-foot wide. The sweeping clay oval is one of the world's most demanding tracks for both drivers and equipment.

Today, the track brings more than race cars and drivers to North Central Kansas, but also an atmosphere of excitement and enthusiasm with fans from all over the world attending their favorite races throughout the year.

LOCAL INVOLVEMENT
When you consider the numbers of local people who have "worked" that half-mile dirt track with horses and now more modern machines to get it into the condition fit for races throughout the years, the High Banks is a long-standing tradition with a very special racing culture, involving many, many people in and around Republic County.


It's long been tradition to accept ATV's on the Belleville streets. Many race teams don't bring additional transportation in addition to the haulers.

Locals open up their homes as well as offer garage and yards for drivers to park, since all lodging within a 30-mile radius is booked months before a race.

THE MUSEUM
To recognize the long-standing tradition and prestige of various racing events held at the track, the High Banks Hall of Fame & National Midget Auto Racing Museum was opened in 2004. The museum was built to capture and remember racing personalities and display memorabilia and race cars that influenced the historic racing community. Cars and pictures along with results and history represent all the years of racing from 1910 to the present time.

About 160 owners, drivers, mechanics and others are nominated per year but only ten are accepted into the High Banks Hall of Fame annually. The arched facade replicates the limestone grandstand at the Belleville High Banks race track. 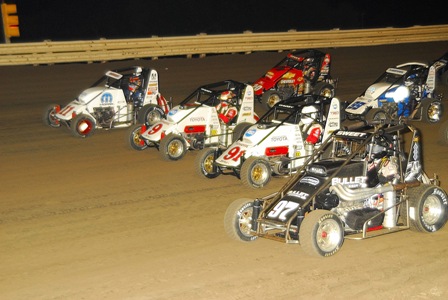