Place to learn about this:  Post Rock Museum, LaCrosse.

Where to see the post rock fences:  You can see post rock fence posts throughout the Smoky Hill Region but especially in Lincoln County (Post Rock Capital of Kansas), and Rush, Russell, and Ellis counties.  Another showcase of the artistic side of post rock is found behind the Grassroots Art Center in Lucas.

The Post Rock Scenic Byway in Russell County is a beautiful drive and will take you by many post rock fence posts.

HISTORY OF POST ROCK
The limestone that is visible throughout the Smoky Hill counties is at the top of the many layers of sediment deposited by a series of interior seas that covered Kansas between 500 million and 65 million years ago. The fossil record of the complex forms of animal and vegetable life that existed from this period are visible in this limestone.

This picturesque rock, which lies just below the surface of a 200-mile swath of land running southwest from a central point on the Kansas-Nebraska border to a point a few miles north of Dodge City, became the very practical building and fencing material for the settlers who came to this area in the last 25 years of the nineteenth century. The use of the limestone for fence posts and barbed wire to connect the posts was crucial to the transformation of central Kansas from open range land to cropland.

FENCING NEEDED
Cattle ranchers who had been accustomed to allowing their stock to range free, were soon struggling with farmers who wanted to raise crops that were being ruined by roaming cattle. Some ranchers fenced the farm land for the farmers; in other cases the farmers erected their own fences. There was little timber, and other fencing materials were too expensive, so the farmers turned to the same rock they had used to build their houses and outbuildings.

Post rock fences had many advantages over the wood fences used in other parts of the country. The posts cost only time and labor to quarry. Stone posts did not rot like wood and prairie fires could sweep through them without destroying them. It has been estimated that at the peak of their use, there were approximately 40,000 miles of these stone post fences in central Kansas.

ADD SOME BARBED WIRE
Hedge thorns provided the basic model for the barbed wire fence. In 1874, the Glidden and Haish patents provided the availability of barbed wire in the market; however, its use was not legally sanctioned in Kansas until 1883. Smooth wire, available in the market since the invention of the telegraph in the 1830s, had proved inadequate because the cattle rubbed against it, loosening the posts and breaking the wire. Barbed wire was being used almost exclusively by 1890.

The major problems that faced the farmers who settled in the western half of Kansas after the advent of the railroads in the 1880s and 1890s were finding water and fencing. The problem of fencing was solved by combining the unique deposits of limestone with the newly patented barbed wires.

LEARN MORE ABOUT POST ROCK FENCE POSTS
The rock post and barbed wire fences are fully interpreted in the Barbed Wire and Post Rock museums at 120 and 202 1st Street in LaCrosse. The combination of the two provides a complete interpretation of this unique part of Kansas history.

These picturesque fences are still in place throughout most of Rush County. They have proved their worth for more than 125 years. 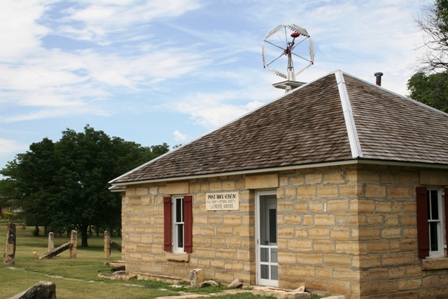 The Post Rock Museum in LaCrosse is a good place to learn moreabout the history and use of post rock in Kansas.  Photo-KSF 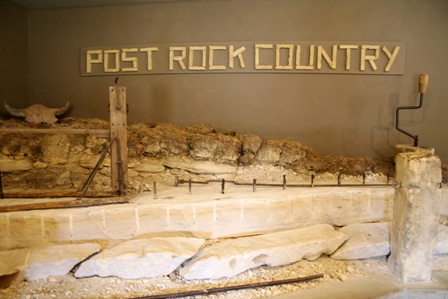 The museum houses creative displays and interesting informationabout the uses of limestone in Kansas.  Photo - KSF