Lake Scott State Park is a finalist for the 8 Wonders of Kansas because...of its history, its role as an oasis in an otherwise semi-arid land, and its craggy canyons that provide sudden and surprising relief on the High Plains of western Kansas. 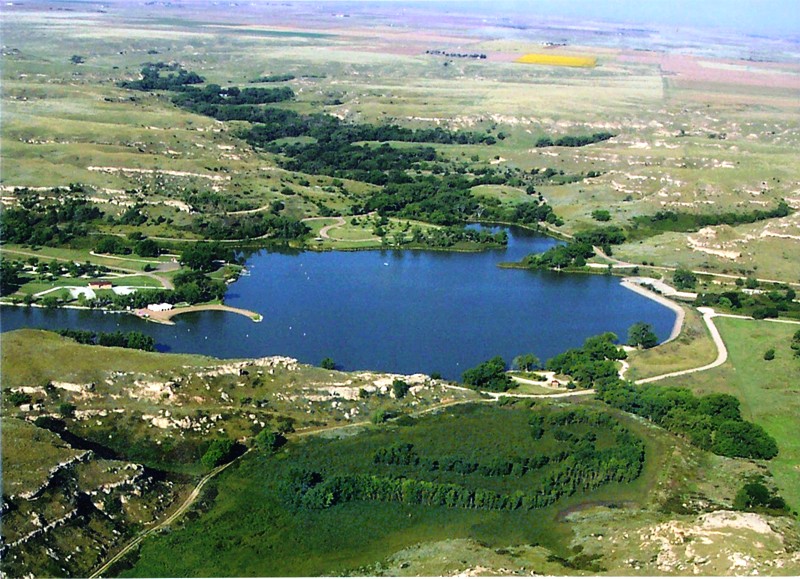 THE LAKE SCOTT STATE PARK STORY
Like an oasis in the desert, the Lake Scott area stands out from the typical High Plains landscape of western Kansas, not only because of water, trees, and vegetation but also because of the unexpected relief here in this otherwise flat landscape. Lake Scott is situated in a valley carved into the steep bluffs of the Ogallala Formation, composed of sand and gravels that have been naturally cemented together. These rocks rim the steep canyons and draws that surround the lake. The Ogallala is a water-bearing formation in many places. Here the Ogallala is underlain by much older Niobrara Chalk, and water flows out from this contact between the Ogallala and the Niobrara at the rate of hundreds of gallons per minute, flowing into the lake, which is also fed by Ladder Creek. Among the most important springs is Big Spring, which alone produces more than 300 gallons of water per minute, making it one of the largest springs on the Kansas High Plains. White-tailed and mule deer are common. Beaver dams are seen along Ladder Creek. Swift foxes, with their large ears, are seen in the area. The area is also known for its large variety and number of reptiles.
FAMOUS SITES WITHIN THE PARK & HISTORY OF THE PARK
The 100-acre spring-fed lake in Ladder Creek Canyon has been known for hundreds of years.  In the 1600s, the Taos Indians built a pueblo and spring-fed irrigation ditches in this area.(1)  Remnants of the El Cuartelejo Pueblo Indian Ruins can be seen at the park and are on the National Register of Historic Places.  Only lower portions of the stone walls remain, but they show the rooms' interior.  The pueblo had long been buried under drifting soil but was discovered by Herbert Steele in 1898.

Another site is the Steele Homestead.  Steele and his wife Eliza built their sandstone home in 1909.  They wanted their homestead to become a public park and recreation area and sold their 640 acres to the Kansas Forestry, Fish and Game Commission in 1928.

Across from the Steele homestead on top of a ridge is a monument.  The granite rock and bronze plaque was placed here in memory of Herbert Steele.
NOW, A TOP-NOTCH RECREATION AREA
Today there is camping, fishing, canoe & paddle boat rentals, and trails for hiking and horseback riding.

The Hiking Guide of Kansas describes the 7-mile Bridle and Mountain Bike Trail as wild, craggy, and untamed as it circles the lake.

Most recently, Lake Scott State Park was designated by National Geographic Travel magazine as one of the top 50 parks to visit in the United States.
Hours and state park entrance charge.  As of January 5, daily vehicle permits are $3.70 from October 1-March 31 and $4.20 the rest of the year.