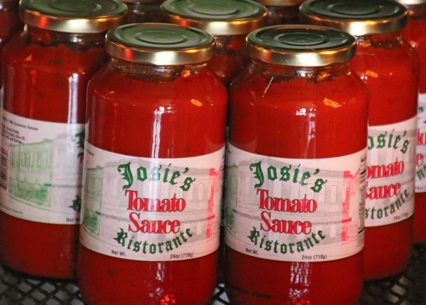 Open Wednesday-Saturday 5-9 p.m.Josie's Ristorante is a finalist for the 8 Wonders of Kansas Cuisine because of its reputation as the best Italian food in southeast Kansas using recipes that Grandmother Josie brought over from Italy in 1904.Frank and Josie Saporito came to the U.S. in 1904 to take advantage of the mining jobs and Eastern European influx to the Cherokee County/Crawford County area.  With Josie came old-world recipes.In 1986, Frank and Josie's grandson Mike, and his wife Sally, converted a vacant 1890s grocery store into a restaurant in the old mining town of Scammon, population 490 in Cherokee County.  Many Italians had once worked the mines in this area.  About ten years ago the restaurant was renovated.The food is made fresh daily.  Sally does the cooking and food prep though other family members are involved in the business.  She makes the dough fresh each morning for all the pasta including noodles for the lasagna, ravioli, and spaghetti.  She makes the sauce fresh daily as well.It's not surprising that people from all over southeast Kansas come to eat Italian at Josie's, but the customer base includes people from all over the Midwest.  The homemade Italian cuisine has earned a consistent reputation.  Favorites include spaghetti, ravioli (especially the fried ravioli), and lasagna, all made from scratch and topped with Josie's amazing signature sauce. Josie's is another case of the reputation being so good that it has allowed a restaurant to thrive in a small town.