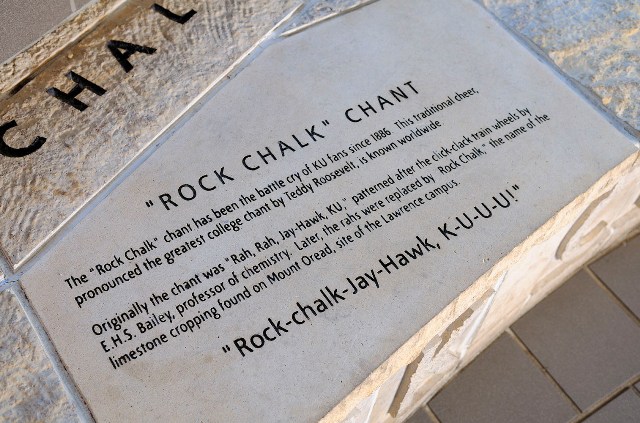 One of the 8 Wonders of Kansas  Customs

One of the best:  The Rock Chalk Jayhawk chant

Best place to see the cheer being performed is at a KU basketball or football game.  Or, click here to see it on You Tube. Or, click here to listen to the KU Men's Glee Club.
You can see the chant etched in stone on the first floor of the Kansas Union.  A display next to the steps illustrates the chant and its history.  Also, a history panel documenting the chant's story is on the fourth floor.

THE CHANT
KU's world famous Rock Chalk Chant evolved from a cheer that a chemistry professor, E.H.S. Bailey, created for the KU science club in 1886. Bailey's version was "Rah, Rah, Jayhawk, KU" repeated three times. The rahs were later replaced by "Rock Chalk," a transposition of chalk rock, the name for the limestone outcropping found on Mount Oread, site of the Lawrence campus.

In 1897 it became the official cheer for the University of Kansas. The chant begins low and gradually builds in volume. There are pauses between each word to allow the students a few seconds to yell and scream. By the end of the chant, the gym erupts as students yell as loud as they can.

Since the early 1990s, Kansas fans have been known to do the slow repetition of "Rock Chalk... Jay-Hawk... KU" when the Jayhawks are believed to be safely ahead, guaranteeing a victory.


EVEN TEDDY ROOSEVELT LIKED IT

The cheer became known worldwide. Teddy Roosevelt pronounced it the greatest college chant he'd ever heard. Legend has it that   troops used the chant when fighting in the Philippines in 1899, in the Boxer Rebellion in China, and in World War II. At the Olympic games in 1920, the King of Belgium asked for a typical American college yell. The assembled athletes agreed on KU's Rock Chalk and rendered it for His Majesty.
Sources:  http://www.ku.edu/about/traditions/; www.kusports.com; wikipedia 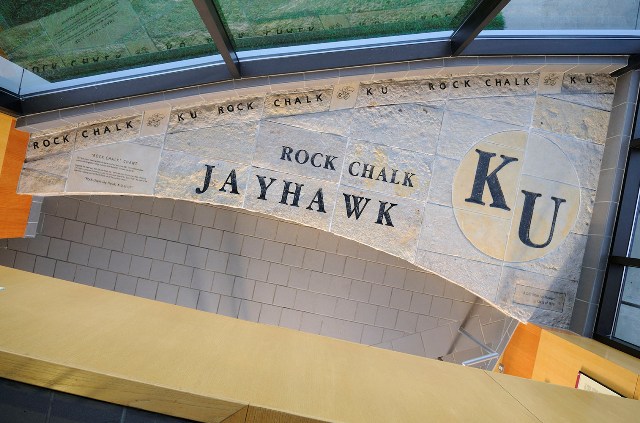