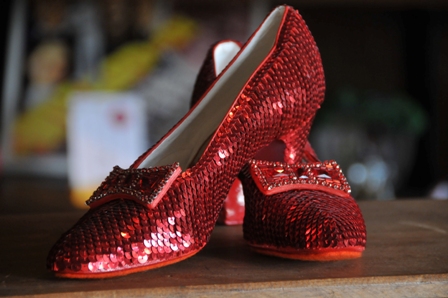 The Custom: Clicking your heels three times and saying, "There's no place like home."

Where to learn more about this custom? Wamego offers the OZ Museum and you can see Dorothy's House and the Land of Oz in Liberal.

Home to one of the largest collections of privately-owned Oz memorabilia in the world, the OZ Museum is a bright, colorful stop on Wamego's main street.

Fans will start their journey in the sepia-toned Auntie Em's Gift Shop, pass through the screen door and into the Technicolor world of Oz.

The museum also houses memorabilia from the famous 1939 MGM musical starring Judy Garland. It encompasses earlier silent films, one of which starred none other than Oliver Hardy (Laurel and Hardy fame) as the Tin Man, as well as "The Wiz" starring Diana Ross and Michael Jackson. The OZ Museum offers everything imaginable from the earliest Baum books and OZ Parker Brothers board games to today's collectibles.

DOROTHY'S HOUSEDorothy's House, a farmhouse built in 1907, was donated to the Seward County Historical Society and moved to its present location on the grounds of Coronado Museum. It has been carefully restored and furnished to replicate the house shown in the movie "The Wizard of Oz", reproducing the warmth of the farmhouse where Dorothy realized that, "There's no place like home."

Liberal got the idea for Dorothy's House when a local businessman was on a trip. When he told his waiter he was from Kansas, the waiter replied, "Kansas, that's where Dorothy's from." The businessman, realizing Dorothy didn't have an official hometown, brought the experience back and Dorothy's house was born.

Former Governor John Carlin recognized the house as the official home of Dorothy Gale in 1981. The public can tour the house.

LAND OF OZ
Next to Dorothy's House visitors may take a tour of the Land of Oz, a 5,000 square-foot exhibit. The animated journey takes the visitor on the Yellow Brick Road and past good and bad witches, the Munchkins, talking trees, winged monkeys, and of course, Dorothy, Scarecrow, Tin Man, the Cowardly Lion, and Toto, too.

THE CREATOR OF LIBERAL'S LAND OF OZ
Originally created and displayed in various places in Topeka, the Land of Oz was moved to Liberal by its creator, Linda Windler, assisted by her parents, Wilmer "Ed" and Lucile Edson, in the spring of 1992. They spent six months recreating the display in its permanent home in a metal building on the Seward County Historical Society grounds. Much of the display was created using recycled materials and common household items such as carpet tubes, to recreate the Emerald City, and discarded plastic flowers from various stores to make the gardens in Munchkinland. Windler even used her own father as the model for the Wizard, filming him saying the famous lines and then distorting the image to recreate the giant head.