THE BEGINNING OF UNDERGROUND LIFE
(Note:  The tunnels and basement businesses referred to are two separate entities --the tunnels being connecting corridors.)

The tunnels of Ellinwood at one time ran through the entire business district. Initially they seem to have been elaborate coal chutes, with the coal delivered by horse and wagon throughout the summer. The covering wooden sidewalks were lifted up and the coal dumped in and then taken back to the furnaces as needed.

The gas boom in the early 1930s changed this situation in two ways - first the buildings were heated with the plentiful and inexpensive natural gas, and the influx of population brought increased needs for shops and services. The heavy limestone block basements provided space for the shops, the tunnels provided communicating links very similar to modern malls. The connecting tunnels (under the sidewalks) ran the two blocks of Main on both sides of the street, up the side streets, and are said to have connected the business district, hotels, and Drummers Sample Room, with the depot, Maennerchor Hall, the mill and brewery. There are indications that at least one, perhaps two tunnels, went under Main street to allow the ladies to cross without wading through the mud.

Businesses known to occupy space in the tunnels were Jung's Barber Shop, which in those days included a public bath, Wolitz Shoe Shop, John Wever's Sample Room, Petz Meat Storage, and a Drummer's Sample Room under the Wolf Hotel.

A PLUS TO BE HIDDEN
With the influx of gas workers and the advent of Kansas prohibition, the tunnels took a colorful turn with a number of activities that operated more comfortably out of sight of state officials. While these activities were not publicized in the newspapers of the time, there are several subtle illusions, as well as many racy stories recounted by the old-timers.

A PLACE OF REFUGE

The tunnels also provided a safe refuge when tornadoes were in the area. Possible, but not documented, is the story that the tunnels were also a refuge during the anti-German hysteria that swept Kansas during the First World War.  Many with German heritage lived in the area.

LIMITED ACCESS
Most of the tunnel system remained open and in use through the 1930s, but since the Second World War, separation walls were built to block access from one building to another.

Then in the summer of 1982, with the building of new sidewalks on Main street, most of the remaining tunnels were filled with sand, retained, but blocked. Now, only the tunnels under the Dick Building, the Wolf Hotel, and the 1883 are open, with those under the Dick Building the only ones opened regularly for visitors.

OPENED FOR TOURS
Starting in 1981, Adrianna Dierolf began showing the Tunnels to the public. She had shown the tunnels to approximately 12,000 people when the property was sold in 1992 to the Ellinwood Museum Association. Since 1992, an additional 2,000 people a year have seen the Ellinwood Tunnels. Tour guides share the history of the underground during appointed tours.

Upon entering the tunnels you will see the leather harnesses as they were left hanging on the pegs in the harness shop. Along the tunnel is Jung's Barber Shop with its original flooring, wallpaper, and barber's mirror. From the barber shop you will enter the "Bath" room with its bare, but luxurious accommodations of the time. 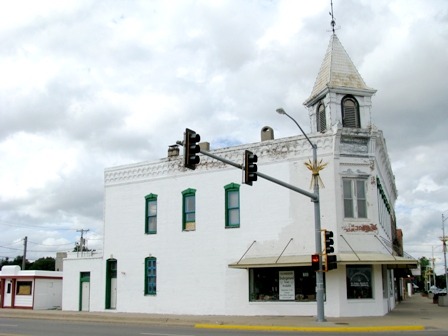 Entrance to the tunnel is behind this building. Photo courtesy Robin Proffitt