Where can you learn about this custom? The Greyhound Hall of Fame in Abilene tells how greyhound racing started in Kansas and much more! 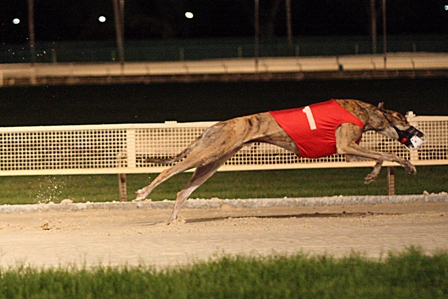 Did you Know?
Source: Ron Wilson, directo r of the Huck Boyd National Institute for Rural Development at Kansas State University, wrote the following story for one of his Kansas Profiles.

Let's visit a hall of fame. As we enter, we are greeted by one of those who was inducted into the hall of fame several years ago. Our greeter is one of the greats of the sport, who won more than a quarter of a million dollars during his illustrious career. But this isn't exactly Tiger Woods. No, it's not a tiger, but it is an animal: A greyhound. Today we'll learn about the Greyhound Ha ll of Fame, which is found right here in Kansas. It's today's Kansas Profile.

The greyhound breed of dog has a rich history, tracing its ancestry back for thousands of years. Ancient paintings show greyhounds with Egyptian kings. The greyhounds were animals of nobility.

The first type of greyhound races was called coursing. Kansas was the site of the first official organized greyhound race in this country. The first coursing meet was held near Great Bend in 1886. Wow.

In later years, racing on special greyhound tracks developed as we know it today. In the early days, dogs chased after a live rabbit. In the 1920s an artificial lure was developed for the dogs to chase, as is used for races today.

The history of greyhound racing and leaders of the industry are honored at the Greyhound Hall of Fame in Abilene. Abilene seems to be a center for the greyhound business. Some 20 greyhound farms can be found in the area. The breed registry is maintained by the National Greyhound Association, whose offices are located nearby.

In 1973, the Greyhound Hall of Fame opened its doors in Abilene, across the street from the Eisenhower Presidential Library and Museum. Ed Scheele was a designer who helped create the initial displays for the museum. About a year later, Ed heard that the museum director was leaving and the museum was at risk of closing. So he contacted the board and offered to run the museum on one condition: He would still be allowed to work on free-lance projects when outside design projects came along. The board took him up on the offer and the rest is history.

Today the Greyhound Hall of Fame has gained national attention for its unique subject matter and quality of experience. Visitors are greeted by one of the hall of fame inductees, a retired racing greyhound named Talented Mr. Ripley. The dog lived up to his name, earning more than a quarter of a million dollars during his racing career.

After his retirement, he came to live at the Greyhound Hall of Fame where he calmly greets visitors today. Ed points out that greyhounds are very docile dogs, because they have been around people so much.

All this attracts some 30,000 visitors a year from all over the globe to come to the rural community of Abilene, Kansas, population 6,468 people. Now, that's rural. For more information, go to http://www.greyhoundhalloffame.com/.