Home / 8 Wonders of Kansas / customs / Reciting and chanting the Psalms, Atchison
An 8 Wonder of Kansas Customs

Reciting and chanting the Psalms, Atchison

Custom: Reciting and chanting the Psalms

Where can you see this custom in practice? St. Benedict's Abbey in Atchison

The Benedictine Monks recite or chant the Liturgy of the Hours four times a day, seven days a week.

Sunday
7 a.m. Morning prayer
10 a.m. Mass
12:05 p.m. Midday prayer
5:05 p.m. Vespers
THE HISTORY OF THE LITURGY
For 152 years the Benedictine monks of St. Benedict's Abbey have been living in community and praying the Psalms of Sacred Scripture. Since 1857, this form of prayer, known as the Liturgy of the Hours, the official prayer of the Catholic Church, has been prayed by the monks in Atchison at least four times a day, seven days a week, 365 days a year, totaling more than 55,500 days straight of communal prayer. 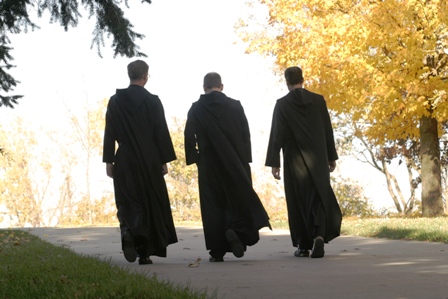 Photo courtesy St. Benedict's Abbey
WHAT IS THE LITURGY OF THE HOURS?
The Liturgy of the Hours is a combination of reciting and musical chanting of the Psalms. The monks' prayer, which includes Latin and an English translation of Gregorian chant, is a combination of un-accompanied voices singing in unison and voices accompanied by organ. According to ancient custom, the monks sit in two divisions of choir stalls, facing one another, and chant alternating verses.

The practice of praying the Liturgy of the Hours goes back to the early church and is a continuation of the Jewish practice of reciting prayers at certain hours of the day or night. In the Psalms there are expressions like "in the morning I offer you my prayer," "at midnight I will rise and thank you," "evening, morning and at noon I will cry and lament," "seven times a day I praise you."

In keeping with Benedictine hospitality, the public is invited to participate fully in the Liturgy of the Hours.

MONKS IN KANSAS
This custom of praying the Liturgy of the Hours, and the Benedictine life of a monk in general, has flavored the lives of Kansans across the state. Monks founded Benedictine College in Atchison in 1858, which currently has a student population of over 1,400 full-time students. The monks founded numerous parishes in northeast Kansas, as well as in Missouri, Nebraska and Iowa, even setting up a monastery for a short period of time in the late 1800s in southwest Kansas near Ashland. The Benedictine bishop, Louis Fink (bishop of Leavenworth from 1871 to 1904), encouraged German immigrants to settle in colonies throughout Kansas so the monks and other German-speaking priests could better serve them. Bishop Fink took out ads in German newspapers to encourage immigration to Kansas and the settling of German colonies.