Place where you can see it happen:  Concordia's Kearn Auction House

As told by Tammy Britt

THE STORY
While Kearn Auction House has only been open since 2007, the custom of saving one's favorite seat at a Concordia auction house has been in practice for as long as some of us remember. 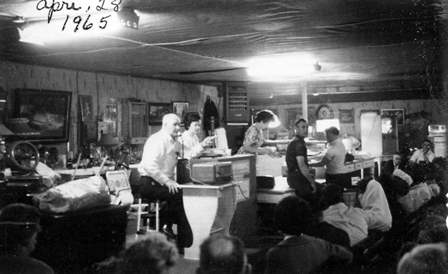 In 1962 Clifford Sallman opened the Sallman Auction House. Folks would gather each week to chat, savor Grandma Curry's famous homemade pie and bid on the treasures of others.  Back in those days each number was printed on a wooden paddle. It wasn't long before certain numbers were always missing from the stack as the regulars latched on to their favorite lucky number. Prior to each auction, paddles began to show up on certain chairs as a way of saving that bidders favorite seat.

As a young boy Danny Kearn would go to the auctions with his family, which began his life long love affair with auctions. As a young man he loved the auctions so much he began to help set up for each auction at Sallman's. Around 1978, Sallman retired and his daughter and son-in-law took over the weekly auctions. They ran the auction house until their retirement in 1992.

For years Danny hoped someone would re-open the auction house. Finally, in 2007 he and his family scraped up enough money to purchase the building at 220 W. 5th, Concordia. Just two weeks after finalizing the purchase of the building, on May 19, 2007 Kearn Auction House opened. They sell everything from accordions to zippers and they also do a lot of estate sales.

Today the wooden paddles have been replaced with paper cards. However, the same twenty or so numbers are signed up permanently. Wander in to check out the merchandise to be sold and you will notice that pillows mark certain seats in the first two rows on each side of the aisles.

Danny, laughingly nods his head. Just like when we were kids, the regulars are marking their favorite seats. Just try to move one of those pillow and they will set you straight. That seat is SAVED!

Saving your favorite seat at the local auction house has been a Concordia Custom for over 40 years.