Council Grove is one of the 8 Wonders of Kansas History because it is a Santa Fe Trail National Historic Landmark town and is the site of a 1825 treaty that led to an intersection of cultures between Kaw Native Americans and Euro-Americans.

From 1821-1866, the Santa Fe Trail was known as America's first international superhighway of trade and commerce. Spanning 900 miles between Missouri and Mexico the trail brought together a cultural mosaic of individuals. In 1860 Seth Hays recorded 5,405 Mexican and Euro-American traders, 1,532 wagons and 17,282 mules, oxen and horses passed through Council Grove.

A self-guided tour brochure, available in most Council Grove shops, features 24 historic sites around town. Visitors will learn about an intersection of cultures between the Kanza (Kaw) tribe and Euro-Americans during the trail days through the tour or online. Kansas is named for the Kanza or Kaw tribe.

SYMBOLS OF THE TWO CULTURES

To the west of the U.S. 56 and K-177 intersection is the Guardian of the Grove Kaw statue. To the east is the Madonna of the Trail statue situated on one of the most important rendezvous points on the Santa Fe Trail. These two statues symbolize both cultural cooperation and collision.

THE TREATY THAT LED TO THE NAME OF COUNCIL GROVE

On August 10, 1825, three U.S. Commissioners met with representatives of the Osage tribe under a large oak tree. A treaty was signed that gave Americans and Mexicans free passage along the Santa Fe Trail in exchange for $800. The Council Oak was part of a mile wide grove of trees that provided shelter and wood for wagon repairs on the Santa Fe Trail, thus the name Council Grove was carved into a large Bur Oak. A few days later a similar treaty was signed by the Kaw tribe.

Before the Council Oak blew down during a windstorm in 1958, the oak was approximately 70 feet high and measured 16 feet around. The remains can now be seen at 3rd and Main. Council Grove is a Tree City USA, a guide to the historic trees is available. 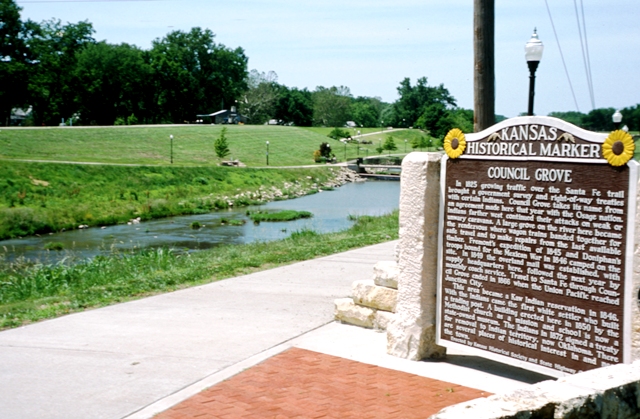 Completed by volunteers in 1998, the Neosho Riverwalk gives you a birdseye view of the historic Neosho River crossing. One of the most documented crossings on the Santa Fe Trail, caravans could cross this site in inclement weather because the river bed consisted of bedrock, not mud, as in other crossings along the Trail.

The lighted and landscaped ADA accessible Neosho Riverwalk connects the Madonna of the Trail, the Guardian of the Grove, and the Kaw Mission State Historic Site.

In total, there are more than 24 historic sites you can explore on your own, many with signage by the National Park Service.


LEARN MORE ABOUT THE KAW INDIANS AT HERITAGE PARK

Southeast of town is the Allegawaho Memorial Heritage Park. Located on the last Kaw reservation, you will see the monument to an unknown Kanza warrior, stabilized ruins of the Kaw Interpreter's house, and can hike the Kanza Heritage Trail walking trail. The Flint Hills Nature Trail connects Council Grove and Allegawaho Park along the old railroad bed. The park is 3.5 miles southwest of Council Grove.

Enlightened information about the history of Council Grove, including a virtual tour of Allegawaho Memorial Heritage Park, is available on the Kaw Mission State Historic Site web site.