Historic Fort Riley is one of the 8 Wonders of Kansas History because the post has played a vital role in the settling and defense of our nation since 1853.
Soldiers were first stationed at this U.S. Army post in 1853. Built at the confluence of the Smoky Hill and Republican Rivers, Fort Riley was one of a series of forts founded to protect settlers and traders moving across Kansas to the West. The post played a vital peacekeeping role during the Bleeding Kansas days of the 1850s, and after the Civil War it became a staging area for troops to protect an expanding frontier.

In 1892 Fort Riley became an important fixture in the U.S. Army's educational system. Its schools served as the center for the evolution of cavalry tactics and training. The post continues to operate a mounted color guard for special occasions. The horses are housed in the historic cavalry training stables. Fort Riley also served as a training center during all of the major wars of the 20th century. Soldiers learned skills that would be tested from the trenches of World War I and on the far-flung battlefields of World War II, to the cold of Korea, the jungles of Vietnam, the sands of Kuwait and to today's conflicts in Iraq and Afghanistan. Fort Riley is home to the Army's 1st Infantry Division.
FORT RILEY POINTS OF INTEREST
All adults must have a government-issued photographic identification card or passport.  All cars or person are subject to search.

Even if you just have time to drive around the Fort, you'll be impressed.  The best fort entrance is at I-70 Exit 301.

U.S. CAVALRY MUSEUM, #205 Custer Avenue. Open Monday-Saturday 9 a.m.-4:30 p.m.; Sunday noon-4:30 p.m. 785.239.2737.
Originally the post hospital and later post headquarters, the building housing the U.S. Cavalry Museum is one of the oldest buildings on Fort Riley. The museum provides a great deal of information about the horse soldier from the Revolutionary War to the branches inactivation in 1950 . Learn about the role of the cavalry in the military from the 1800s until around 1950. Displays include Teddy Roosevelt's Rough Riders, Buffalo Soldiers, and World War II Horse Soldiers. 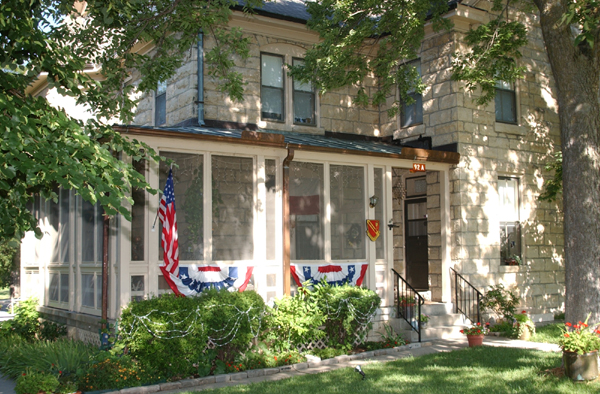 SELF-GUIDED HISTORIC TOUR: A drive through the original fort takes you along curving lanes and shaded environs as you pass the many historic homes and halls of old limestone, the monuments, the parade field, and so much more. A self-guided tour brochures is available at the U.S. Cavalry Museum.


CUSTER HOUSE, 24 Sheridan Avenue.  Open Memorial Day-Labor Day, Monday-Saturday 10 a.m.-4 p.m.; Sunday 1-4 p.m. 785.239.2737. 785.239.2737.
A white picket fence surrounds the only double set of officers' quarters remaining from the fort's early history. The rooms are furnished with period furniture form the late 19th century and offer a glimpse of what one officer's wife described as, "the glittering misery" of army life.  Historians believe that George Custer and his wife Libby actually lived in a similar set of quarters nearby.

1st INFANTRY DIVISION MUSEUM, Building #207, Custer Avenue, next to the U.S. Cavalry Museum. Open Monday-Saturday 10 a.m.-4 p.m.; Sunday 1-4 p.m.785.239.2737.
This museum chronicles the history of the Big Red One from 1917 to present time. Four major campaigns from World War I through Operation Desert Storm to today's conflicts in Iraq and Afghanistan are highlighted in this museum. Exhibits focus on the training and combat operations of Fort Riley units. 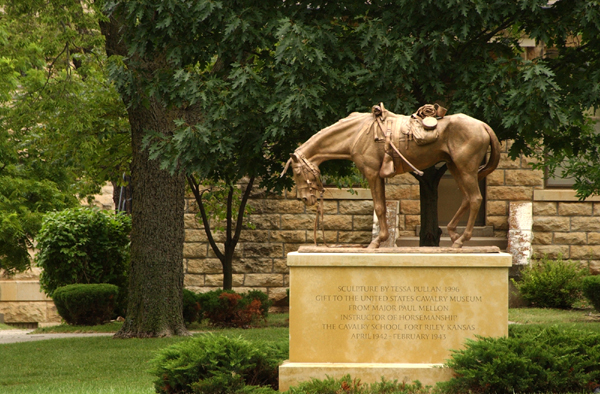 CIVIL WAR HORSE STATUE facing the street in front of the U.S. Cavalry Museum.
Placed on the museum grounds in 1997, this statue is dedicated to the million and a half horses and mules that perished or were used during the Civil War.This three-quarter size statue of a riderless horse ravaged by the war was commissioned by Paul Mellon who served at Fort Riley during World War II.

OLD TROOPER STATUE at the cavalry parade field on Sheridan Avenue, across from the Custer House. This monument is a symbol of the heritage of the horse cavalry at Fort Riley and was inspired by a Frederic Remington sketch. This statue also marks the grave site of Chief, the last cavalry horse registered on the Army's rolls as a cavalry mount. Chief died at Fort Riley in 1968.

FORT RILEY POST CEMETERY, West Huebner.
Simple white stones leave powerful messages in this nearly full cemetery.Markers noting the mass graves of those who died in the 1855 and 1867 cholera epidemics stand in the cemetery's southeast corner.

Graves in the oldest section include those of several Confederate soldiers from the Civil War. A pet cemetery is across from the main cemetery. The headstones and pictures convey the importance of pets in post life.
FIRST TERRITORIAL CAPITAL OF KANSAS, state historic site. Huebner Road from Fort Riley. Due to construction, it is scheduled to re-open after mid-June, 2010. 785.784.5535.
The first legislature of the Kansas Territory convened for four days during July, 1855. This modest limestone building housed this first meeting of the Kansas Legislature. Some historians claim that decisions made in that initial meeting lead to the beginning of the Civil War. Exhibits include several about "Bleeding Kansas" and the controversy surrounding Kansas' involvement in the Civil War.